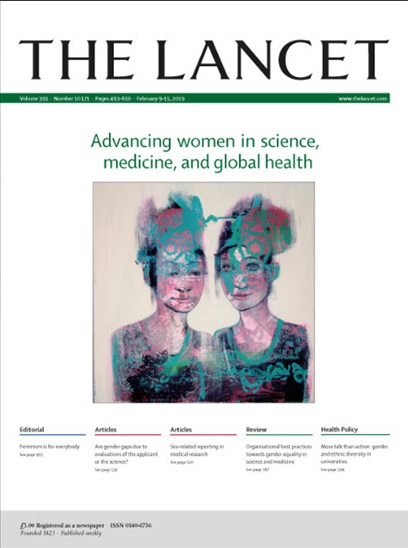 As part of the Lancet Group’s commitment to increasing gender equity, diversity, and inclusion in research and publishing, all of the publishing group’s 18 medical journals have adopted a new Diversity Pledge and No All-Male Panel Policy.

The initiatives are outlined in a commentary written by Lancet Group editors, which states that they value diversity in all its dimensions and support the need to improve the inclusion in research and publishing of people across gender, ethnicity, geography, and other social categories.

Dr Richard Horton, Editor-in-Chief of The Lancet, says: "We recognise that publication is a chief currency within science, medicine, and public health. It is key to the ability of women and people of colour to contribute, receive recognition, and accrue the experience, visibility, and achievement to compete for advancement. As editors and journals, we are just one part of an ecosystem that includes academic institutions and funders where gender bias is well-documented, and of a broader society that disadvantages certain groups to create an uneven playing field. But we are committed to be the change we want to see, and to playing our part in helping create diversity and inclusion in health research and publishing. We encourage other publishers, journals, and members of the science community to contribute to these pledges."

These pledge and policy follow the Lancet’s special issue highlighting the lack of diversity and representation of women, people of colour, residents of the Global South in author, reviewer, and editorial positions, such as this article which determined that less than a third of authors and reviewers in high-impact medical journals are women.

As part of the Lancet’s own commitment, all 18 Lancet Group journals committed to refreshing their editorial advisory boards to include at least 50% female members. The new comment confirms that eight of the 18 Lancet journals have met their target of including 50% female editorial board members, and it loks likely that the remaining journals will achieve this by the end of 2019. They also note that, overall, 46% of the editorial advisory board members at the Lancet Group are women, and 10 of 18 (56%) Editors-in-Chief at the Lancet Group are women.

The new diversity pledge commits to further increasing the representation of women and colleagues from low-income and middle-income countries among the journals’ editorial advisers, peer reviewers, and authors.

The new no all-male panel policy states that Lancet Group events will aim for at least half of any panels to be women (included as panellists, not only as chairs or moderators), and that Lancet editors will not serve as panellists at events with no women on the panel (“manels”).

Dr Jocalyn Clark, Executive Editor at The Lancet, says: “Today’s announcements show that we are committed to drive change within The Lancet Group that contributes to greater inclusion and diversity within research and publishing more broadly. That our announcements come six months to the day of #LancetWomen – our theme issue calling for structural change to achieve gender equity – shows that we are making progress on our own commitments to increase the representation of women in our work. They also show we are holding ourselves accountable. We hope that others, including medical journals, will join us in making these public pledges.”

To introduce the pledge and policy, the Lancet Group has updated all instructions and communications to authors and reviewers to include the Group’s preference for diversity.

The full Diversity Pledge and No All-Male Panel Policy are as follows:

The Lancet Group Diversity Pledge
The Lancet Group values diversity in all its dimensions. We are passionately committed to improving health equity. We recognise that many groups are under-represented in research including women, people of colour, and socially disadvantaged populations. The Lancet Group is committed to increasing diversity and inclusion in research and publishing, and in particular to increasing the representation of women and colleagues from low-income and middle-income countries among our editorial advisers, peer reviewers, and authors.

The Lancet Group No All-Male Panel Policy
The Lancet Group is committed to no all-male panels (“manels”). Our editors will not serve as panellists at a public conference or event when there are no women on the panel. For events that we organise or plan, we aim for at least 50% female speakers. Our preference is for women to be included as panellists, not only as chairs or moderators.