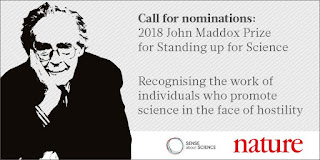 The seventh annual John Maddox Prize for Standing up for Science is open for nominations.

The prize is run by Sense About Science as a means for the scientific community to recognise the work of an individual who promotes sound science and evidence on a matter of public interest, in the face of difficulty or hostility in doing so.

Through this prize, Sense About Science help to spread word of the work individuals which may be otherwise hidden or obstructed and demonstrate support for those who may be involved in similar situations in the future.

Individuals can be nominated for any kind of public activity in these following areas: 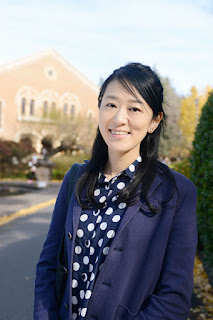 Dr Muranaka was recognised for her work championing the use of evidence in public discussions of the Human Papilloma Virus (HPV) vaccine. She overcame attempts to silence her with litigation and undermine her professional standing. By persisting in her work, she ensured that evidence-based health resources were available not only for Japanese families but for public health globally.

The 2016 prize was awarded to Professor Elizabeth Loftus, memory psychologist at University of California, Irvine, and the highest ranked woman in the Review of General Psychology's list of the 100 most influential psychological researchers of the 20th century. Her work on false memories, particularly in sexual abuse cases, and her expert testimonies in court lead to her being physically attacked, sent death threats and hate mail.

It is perseverance against hostility such as this, the commitment to rigorous application of the scientific method, and the relevance and visibility of their work to the public sphere that the Sense About Science judges deemed to be award-winning.

If you know of someone whose work is of pressing public significance and has overcome adversity to make its impact, then submit your nomination to the awards committee.

The winner will be announced at a reception on 14th November and will receive the prize of £3000 and an announcement published in Nature.

Nominations close in just under two weeks, by the end of Monday 13th August.

To nominate someone for the prize or find out more, visit the Sense About Science website.